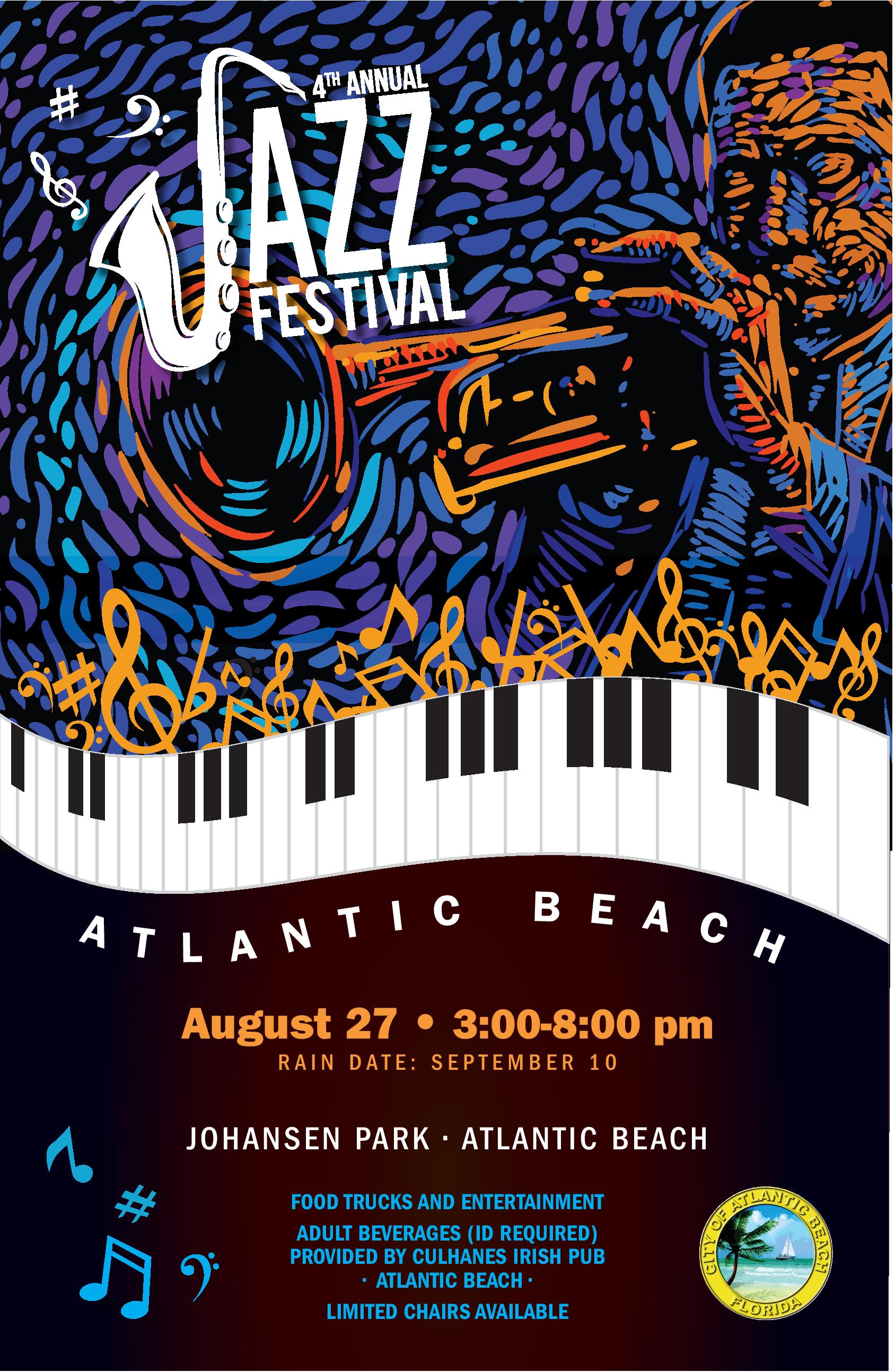 The 4th Annual Jazz Festival will be held on Saturday, August 27, from 3-8 p.m. Rain date is scheduled for September 10.
Enjoy the sounds of local jazz bands, “Marcus Click,” "Versatile Vibe," "Kelly/Scott Jazz Sextet," and "Let's Ride Brass Band" as they serenade you under the tree canopy park. Bring your chairs and blankets, sit near the stage, and kick back and relax for an evening of jazz.
Adult beverages will be available for purchase from Manifest Distillery (ID required). Food trucks will be E&W BBQ, Hook 'Em Up Seafood, and Gala's Ice. There is limited parking, so please consider carpooling, bicycling, or walking - if you live close by.

As a native of Louisville, Kentucky, Marcus grew up with aspirations of becoming a pro football player, but his goals changed after committing over 13 years to the U.S. Navy. During this time, his love for jazz grew by listening, and learning from, the late Grover Washington Jr., David Sanborn, Kirk Whalum, Najee, Dave Koz, and the late saxophonist's Art Porter and George Howard.

He has performed locally in Jacksonville and traveled abroad. He's performed at the 2020 Orange County Mayors Jazz in the Park in Orlando, the 2019 Summer Jazz Series in Jacksonville Beach, and the 2021 Jacksonville Jazz Fest. Last year he released a single, "Sound the Alarm," and his new CD, "Brand New Day," is set to be released this summer.

Versatile Vibe Band is a local band composed of various musicians. They perform live music all over the city of Jacksonville and beyond. They perform various genres of music, including R&B, Jazz, and Neo-Soul, for special events, festivals, and more.

Co-led by award-winning jazz artists, vocalist Lisa Kelly and trumpeter JB Scott, the Kelly/Scott Jazz Sextet features six highly popular Florida-based musicians whose illustrious careers have included jazz clubs to festival stages around the country and throughout the world, including Europe, Canada, the Caribbean, Japan, Russia, and China, and beyond. With a very well-received appearance on the 2022 Jacksonville Jazz Festival big stage as three of the JJF “Hall of Fame” Inductee Allstars and the piano competition rhythm section players, each of the group’s resumes are extensive in regard with countless performances, recordings, radio, and TV appearances, and for their much-respected music mentoring. Often performing and recording together throughout their years of freelancing, the sextet group gives them a chance to collaboratively groove and improvise, entertaining the audience with passion and top-shelf musicianship. Their “classic swing to New Orleans” repertoire includes favorites from the Great American Songbook to modern jazz and tunes popular in the spirit of New Orleans. Songs connected to Ella Fitzgerald, Louis Armstrong, Oscar Peterson, Stan Getz, Diana Krall, Art Tatum, Clark Terry, Lester Young, Al Hirt, and other jazz notables, in interpretive styles of classic swing, groovin’ St. Beat, Brazilian Bossa Nova, light funk, jazz Blues, and more. Hot jazz for a swingin’ summer concert in the park!

"Let's Ride Brass Band" is a Jacksonville based, 10-piece ensemble led by Paul Jackson Live. This funky fusion brass band began in 2018 and has original music on all streaming platforms. Although the band plays with many guest vocalists, Let's Ride is predominantly instrumental and was voted 2021 Best Band in Jacksonville by Void Magazine.

The band is mostly made up of graduates from Jacksonville University and the University of North Florida. These guys started jamming together in college, creating horn lines on small gigs and grew into a brotherhood of musicians. Band leader and lead trumpet player, Paul Jackson Live, describes their sound as "That Duval Sound." They are currently working on their second album, "Let's Vibe," set to release in 2022. Let's Rides' energy is fueled by their desire to inspire others. They believe music is a universal language and can be used to lift people's spirits.